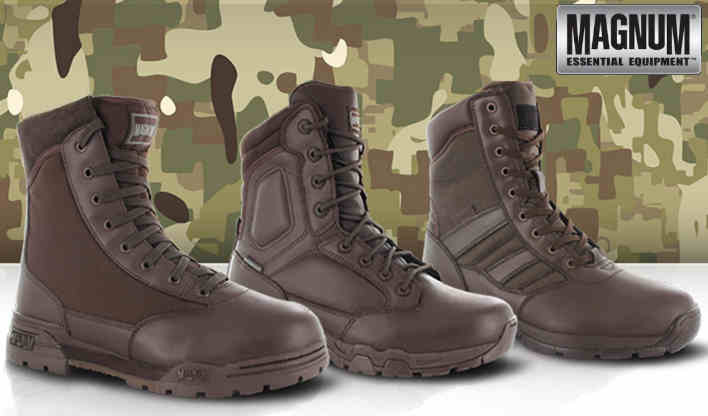 Cadet Direct have supplied 14 free pairs of Magnum Classic Boots  to the Lancashire ACF Nijmegen Team. The boots, supplied by Magnum Boots, are being worn by the team throughout their rigorous training program as well as during the 4 day, 100 mile Nijmegen Marches event itself. The team is being led by 2/Lt Don Lennon who is leading the team for the second year in a row. All footwear will be supplied by Magnum Boots whose global HQ is also based in Holland. This is the second year that Magnum Boots have sponsored the team. Laura Hawes, the UK Marketing Manager for Magnum made the following statement after the announcement ‘…The Lancashire ACF team (we sponsored) did incredibly well last year and we’re excited to be involved with sponsoring them again this year.  The Lancashire ACF team, wearing the same Magnum Classic boots, went on to clear up all the British military team awards at last years event – including Best Overall Cadet Team and Best British Military Contingent Team. The feedback from the team members was extremely positive and you can read some of the Magnum Classic Boot reviews on the Cadet Direct Website. The boot performed well during the training and on the event itself. Particularly notable was the fact that the team only received their boots the night before a gruelling 2 day 50 mile qualification march. Despite this the boots were noted for their immediate comfort and were well received by team members. James Munday, Managing Director at Cadet Direct commented '...one of the advantages of Magnum boots is their athletic, trainer like design and fit. It's inconceivable that a traditional leather military boot could be taken straight out of a box and used on a 50 mile military march - but that's exactly what the Lancs ACF team did with the Magnum Classic..." Hi-Tec Magnum boots were originally developed back in 1982 as part of a requirement by the United States FBI training centre for a lightweight, athletically built tactical boot. Up until this point, personnel had been wearing Hi-Tec Sierra Lite Hiking boots. The FBI liked the boot so much they requested a black, high leg version with a  toecap that could be polished. Cadet Direct will be publishing updates and news from the Lancs ACF team as they progress in their training in the coming weeks.