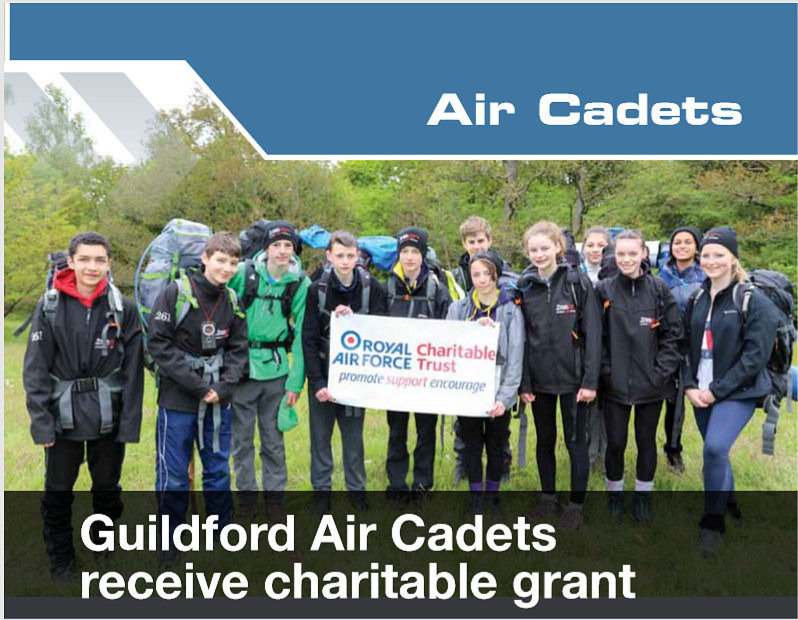 Air Cadets at 261 (Guildford) Sqn have received a boost after gaining a grant from the Royal Air Force Charitable Trust (RAFCT) for £1200.  The  Squadron received the funds to assist their adult staff to gain qualifications in a range of outdoor activities therefore providing enhanced learning opportunities for cadets. The motto of the Air Training Corps is Venture Adventure, so naturally adventurous training, including Duke of Edinburgh Award activities, were always going to be high priority. So far volunteers have taken part in archery, hill walking and DofE Award scheme leadership courses, as well as achieving First Aid qualifications to ensure safety standards are maintained. Furthermore two instructors have also been participating in water-based activity training including British Canoe Union 2 Star Award training and Level 1 Award in Coaching Paddlesport. There are also plans for further training and qualifications in climbing and shooting and it is hoped the cadets will soon be benefiting directly from this as well.
While the Air Cadets do offer some of the training courses, there is often still a charge involved when gaining qualifications from the national governing bodies involved.  Flt Sgt Cooper, the Sqn CO said, “We strive to offer as many activities to our cadets as possible. This grant has allowed our volunteer staff to gain the qualifications needed to make this happen.” The RAFCT supports a broad range of  schemes designed to benefit serving RAF personnel, including regulars, reserves and cadets. Amongst other things, they offer flying scholarship schemes, as well as supporting RAF personnel based in the UK and overseas. RAFCT Trustees award grants to those groups seen as being most worthy of financial support and who promote, support and encourage others.  If you think your cadet unit is worthy of similar support you can apply by clicking here.  Article published with the kind permission of East Park Communications.