Air Cadet Reaches For The Stars! 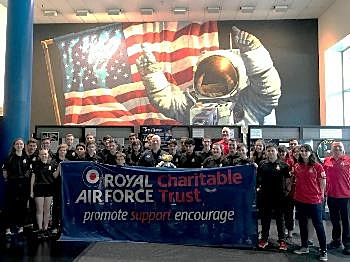 Air cadets from Sussex Wing ATC have just completed the trip of a lifetime! A NASA expedition, funded by the RAF Charitable Trust, has been run as part of the RAF100 celebrations. This enabled individuals from Air Cadet squadrons to travel to the Johnson Space Centre, Houston and undertake STEM (Science, Technology, Engineering and Maths) activities. The trip was part of a nationwide initiative to encourage STEM links and experiences.

Lucky Local Crowborough Air Cadet gets the trip of a lifetime!

Cpl Max S-T from 1414 (Crowborough) Air Cadet Squadron was put forward for this opportunity by CI Sue Hobbs and was lucky enough to be selected to go. A  good nights sleep followed the arrival in Houston. The following day Max and the other Air Cadets undertook a variety of action packed activities which included:

All the activities undertaken tested Max’s knowledge and Air Cadet's teamwork to the maximum, requiring adaption to different skills along the way. The tasks provided Max with the opportunity to use and adapt his new skills and put them to good use in challenges he faces in day to day life.

One of the other highlights of the trip for Max  and the Air Cadets was to meet the Civil Air Patrol (CAP) the RAFAC American counterparts. On arrival at the CAP camp, the cadets were greeted with some drill and a quick briefing. This gave an insight into what role the CAP played within the scope of the US Air Force.

After the briefing the cadets moved on to a walk through search and rescue equipment.  This is used to find emergency distress beacons. The cadets were then required to form a line and search for a casualty. Their CAP counterparts found it rather amusing to be told that the RAFAC called this type of search a FOD Plod! Max and the rest of the cadets got to show off their first aid skills upon recovering their casualty. The fully formed squad with 6 stretcher bearers and the subsequent march impressed the drill sergeants.

The UK  Air Cadets and CAP were mixed and split into two groups after their entrance. They then had the task of teaching or learning drill from the opposing group. Max was in the ‘learning’ group and found it challenging to learn the CAP drill.  This  requires less movement than he was used to. However, after a brief 15 minutes training, they all got to show off their new skills for assessment and Max’s group came out on top.

Cadets were invited to a ‘Whataburger’ for some traditional Texan food

Promotions were handed out after the final parade and this was followed by a photo call.  In addition to this, the cadets were invited to a ‘Whataburger’ for some traditional Texan food, as a surprise. It provided the cadets with a great opportunity to socialise with their American counterparts. They also learnt more about the differences and similarities between their two organisations.

As well as socialising with the CAP during their relaxation time, Max was also lucky enough to see a local baseball game. This was between the Houston Astros and the Texas Rangers. The thrill and excitement of the game made up for the cadets supporting the loosing team!

The trip provided Max and the other cadets the opportunity of a lifetime. This was mainly possible by the work of Flt Lt Dave Hill and Flt Lt Gavin Salt, who both dedicated long hours and effort into organising the trip. Fundraising contributions were also made through the RAF Charitable Trust. The excellent syllabus of STEM related projects  provided a great challenge for Max and his fellow cadets. This has given them a greater understanding of career opportunities within STEM industries.  In addition to developing leadership, teamwork and communications skills.