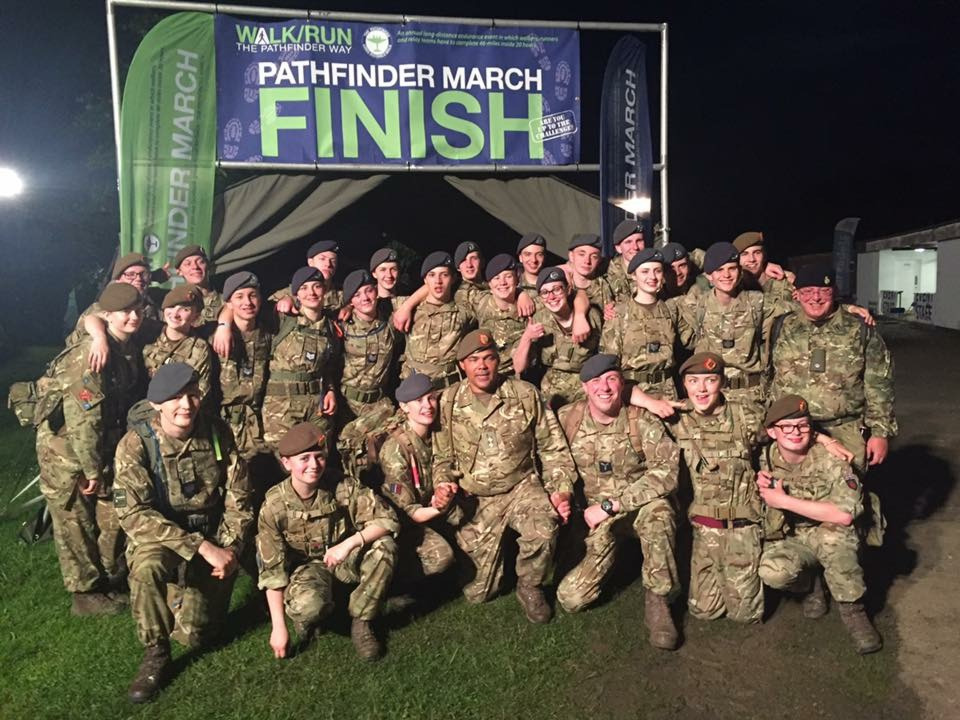 A team of Surrey Wing Air Cadets embarked on the Pathfinder Challenge to complete 46 miles in 20 hours. They were joined by Army Cadets from Lancashire Army Cadet Force. Both teams have been sponsored by kit supplier Cadet Direct.

Together, with a combined team of 29 marchers, they started the challenge marching out of RAF Wyton at 04:00am. The team set off at a steady pace to take on the miles, which is unlike the traditional form of road marching. They left the roads that they were used to and entered the footpaths and bridleways where terrain was uneven, muddy, sandy and gravely. But that didn’t stop them; assisted by coming together and marching in step, all marchers pushed through the route, challenging their mental stamina throughout the 20 hours.

The marchers had an impressive support team consisting of 12 Air Cadet staff and RAF personnel, who all have experience supporting marchers in Nijmegen. The wealth of experience benefitted all walkers as they were well looked after and all rest-stops, checkpoints and route crossings were flawlessly organised and well maintained.

Upon approaching the half waypoint of 26 miles, they planned a long stop, where all marchers completed a full uniform change including clean socks. By this point marchers had been on the route for eight hours. The cadets were pleased to be cleaned and fed, but now they were marching into no-man’s land, marching further and longer than they had ever marched before. They embraced this challenge and powered through, as the sun began to set they reached checkpoint eight of nine, where they were refueled with burgers and energy drinks. Together they then powered through the last six miles through fields. The biggest challenge ahead was seven field stiles to climb over. Together they had to support each other to climb over these while their sore muscles started kicking in. The last two miles back towards the finish line at RAF Wyton were thankfully on road, a terrain and surface our marchers are more accustomed with. It was now 2230hrs and pitch black. The support crew followed and the team all sang their way back to camp with their heads held high, completing the march as the one team they started.

Cadet Flight Sergeant Sutherland commented, “There were moments when the march was difficult with each of us facing our own personal barriers and overcoming these, but we worked together and when one of us was down the others will pick them up and carry on, the other challenge was navigating and though we went wrong slightly a few times, together we over came these and carried on pushing forward.”

Cadet Sergeant Griffin added, “This is the second time I have done this march and it is definitely the ultimate marching challenge, to keep going after our usual 8 hour marching day really becomes a mental challenge and having others to carry you through those down moments does really make you appreciate your team.”

Civilian Instructor Maria Ludwinski, who coordinated the fundraising efforts and sponsorship of the team said, “The sponsorship and equipment supplied by Cadet Direct was invaluable on Pathfinder. To know that all our cadets are fully equipped to march is an important part of being part of the training team and it is warming to know that all our cadets had access to the same quality kit.”